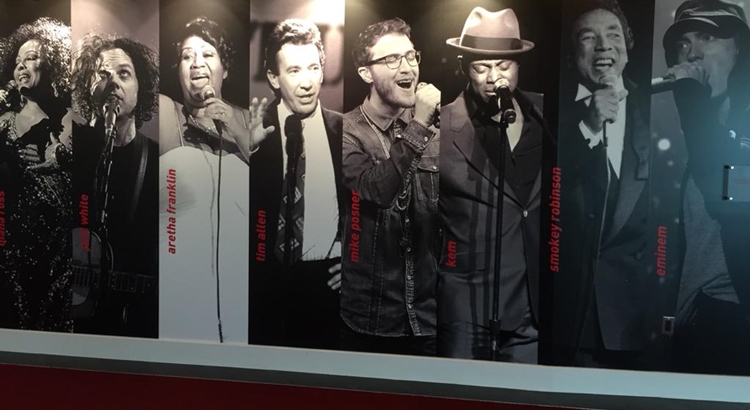 So, I found out that Mike Posner is featured on the wall of The District Detroit and New Arena Preview Center (view the photos below). The photo of Mike that was used was taken from his Unplugged Tour at City Theatre in Detroit, MI on April 6, 2014. Included on the wall with Mike are other famous Michigan celebrities Madonna, Kid Rock, Diana Ross, Aretha Franklin, Eminem, Big Sean and more. You’ll see the wall shown within the first 10 seconds of the video below. Check it out!

Olympia Entertainment and Olympia Development have opened a state-of-the-art Preview Center in the northwest corner of Comerica Park. The Preview Center features three dimensional-printed scaled animated models of The District Detroit and the new arena to provide a fully immersive experience of the transformative project.

“The new Detroit arena is going to offer one-of-a-kind fan experiences and reflect the excitement and energy associated with all that is going on in our hometown,” said Tom Wilson, President of Olympia Entertainment. “The Preview Center is equally amazing, redefining how experiences like this are shared prior to the opening of the arena.”

While the Preview Center will be used for a wide range of events, the primary use for the next 24 months is to tell The District Detroit and Events Center story to a wide variety of potential investors, sponsors and suite and season ticket holders. Driving effective retail, office and residential leasing through the Preview Center will support the positive economic impact of these developments for Detroit and Michigan.

The Preview Center was developed jointly by Olympia Entertainment and Olympia Development to create a unique environment for businesses and investors to experience the dynamic concepts that will soon be coming to life. Detroit-based business L.S. Brinker served as General Contractor of the 100 percent Michigan Made, Detroit Built project.

“A space like this helps all of us visualize how transformational this project is going to be for the city,” said Wilson. “Through the use of incredible models, video, sound, graphics and technology, the Preview Center creates an immersive experience that is sure to amaze.”

Since opening, 26 of the 52 suites at the new arena have been sold. Retail, residential and office leasing will accelerate in the summer and fall of this year.

The Preview Center is initially open to businesses and investors who are interested in opportunities in The District Detroit and the new Detroit arena. Open house events and season ticket holder appointments will begin early next year. In addition, The District will open an information center later this year for the public to learn more about this transformative project. More information, including a video walkthrough of the Preview Center, is available at www.DistrictDetroit.com.

About The District Detroit
The District Detroit will be made up of a dynamic mix of sports and entertainment venues, including six world-class theatres and three multi-use sports venues – home to the Detroit Red Wings, the Detroit Tigers and the Detroit Lions. The District Detroit will also feature residential, office and retail developments that connect these venues into one contiguous, walkable area, where families, sports fans, entrepreneurs, job seekers, entertainment lovers and others who crave a vibrant urban setting can connect with each other and the city they love.
Construction of the arena and surrounding District is expected to generate at least $1.8 billion in total economic impact, 8,300 construction and construction-related jobs and 1,100 permanent jobs. More than $100 million in income from the Events Center project alone is expected for Detroit residents, with significant additional income to be created through future private development. Learn more at www.DistrictDetroit.com.

A BIG Thank You goes out to Dan Milstein, a close friend of Mike’s, for sharing the news and photos with me. 🙂