Before he began his walk across America, Mike Posner sat down to talk with Jamie Yucca of CBS News about his journey. Yesterday, day 1 of the walk, Jamie met up with Mike in Asbury Park, NJ. Today, she caught up with him again in Farmingdale, NJ. Watch the full video below of their conversation!

Mike Posner on his walk across America: “Your life is now”

Grammy-nominated singer-songwriter Mike Posner is in the earliest stages of a new adventure: walking across America. His goal, in part, is to inspire others to seize the day. On Monday, Posner started off in Asbury Park, New Jersey, and he’ll walk all the way to Venice Beach, California.

Braving chilly, rainy weather, some of Posner’s biggest fans turned out to cheer him on and send him off on his new journey.

“My friend told me, ‘It’s like you giving up a year of your life to do this.’ I said, ‘It’s like I’m taking one back,'” Posner told CBS News correspondent Jamie Yuccas.

At 31 years old, Posner is determined to find his way – and use his music to sort through his mixed emotions on life and fame.

What happened? A series of tragedies. In 2017 he lost his father to brain cancer. A year later, his collaborator, Avicii, took his own life. Then his friend, rapper Mac Miller, died from an accidental overdose. In Posner’s new album, “A Real Good Kid,” he’s focused on moving on.

Yuccas asked, “Is it sometimes kind of hard for you, when people come up and say, what you’ve written down is something I feel?”

“I understand it,” Posner said. “I know what it’s like to be depressed and in a dark place, and hear a song and it be a window cracking open to let some fresh air into a stale house.”

Coping with depression and loss, Posner’s life became less about monster hits like “Cooler Than Me” – recorded a decade ago in his college dorm room – and more about inner peace. At a Buddhist monastery last summer, he gave up his phone, electricity and running water.

“I was able to quiet my mind and hear like a bird’s song. … Without the mind sort of rambling, these things kind of go into HD. And it’s like cripplingly beautiful,” Posner said.

His new music reflects new maturity. It’s a far cry from singing about getting high – “I Took a Pill in Ibiza”  earned him a Grammy nomination for song of the year in 2017.

A prolific songwriter, he’s behind hits like “Sugar” for Maroon 5 and Justin Bieber’s “Boyfriend.”

“They’ve called you before the most un-famous famous musician,” Yuccas said.

“I’ve never heard that before,” Posner said with a laugh. “I like it though… I feel like if I’m in a room, probably 9 out of 10 people know those songs you just mentioned. One out of 10, or even less, recognize me or even my name. They just know the songs.”

Now, he’s sharing his songs as he walks across America and performs what he calls “ninja shows.”

“You just tweet out or Instagram out… you say, ‘Hey, I’m going to be at Griffith Park at 7 p.m.’ … There’s no money that changes hands, there’s no tickets. And I love doing those.”

His music is an illustration of his life, and these days, he’s hoping that message strikes a chord with others.

“The big thing is, everyone wants you to forget you’re gonna die,” Posner said. “Why? Because then you waste your time, waste your precious life doing what they want you to do. … People ask, is there a cause for your walk? You know I’m not raising money or anything, but maybe the cause is just to remind people your life is now. If you close your eyes and open them back up, this is it.”

You can follow Posner’s route on his Instagram. He just might announce a pop-up performance, or as he calls them “ninja shows,” in your local park.

Day 2 – The Walk Across America

HitQuarters: Interview with Daniel Weisman, head of Elitaste and manager for Mike Posner 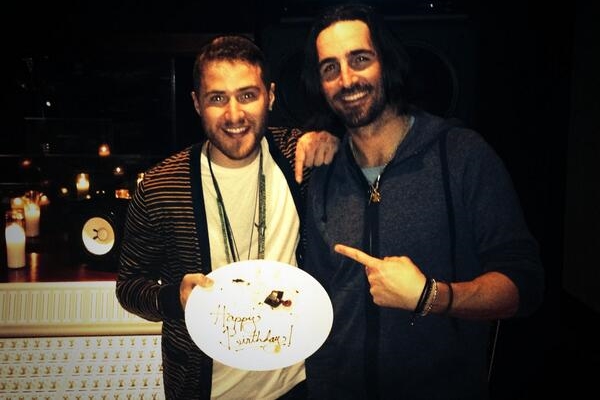 Mike Posner on his 26th Birthday, in the Studio with Jake Owen