MIKE POSNER FANS, THIS IS A MUST READ!

Read a review (the realist & most honest one I’ve ever read) of Mike Posner’s last show on his Unplugged Tour in Los Angeles, CA (April 10, 2014) by none other than his long-time, good friend Aaron Coney! Who, by the way, has been supportive of this fansite since I started it in 2011. Check it out! 🙂

Aaron Coney: It’s been a good little while, but Thursday night I had the opportunity to once again witness one of my best friends performing for a sold-out show at The Mint in Los Angeles, CA. However, unlike many college shows, arenas, and music festivals, this concert was different from any of his shows I’d seen before. After his set, I went backstage and with a smile on his face, the first question he asked me was “what’d you think??” And that’s really all this is — my thoughts. Welcome to Mike Posner Unplugged.

Going into this show, for the first time in a long time, I didn’t know what to expect. I knew this tour hosted smaller venues, provided a more intimate setting, and featured acoustic style performances of his many songs …but I still had no idea what to expect.

Around Christmas 2013 Mike and I took a car ride home back to Southfield from Detroit, and in the car, we talked about him finding his way as a man. We talked about finding purpose and direction, and how he struggled with that, especially after his single “Looks Like Sex” flopped (his words, not mine). It took some time for him to discover what was really important and to put things into perspective, and at the time it was hard for me to relate because I hadn’t been there yet. Well now, although done individually and differently, I think we’ve both gone on similar journeys of self-discovery and awareness. All the changes I’ve gone through in the past year caused me to really be able to appreciate Mike’s growth and his new music that reflects that growth, that much more.

Before Mike really dug into his set, he said “this is for the real fans. This is something we’ve never done before, and honestly something we may never do again.” Instantly everyone in the packed room felt proud to be amongst the 150 or so in attendance for such an intimate affair. As he stood center stage on a Persian-style rug that came directly from his very own living room, Pose explained his aim behind this unconventional tour:

I’m always playing songs on my piano or guitar at home, and I realized my fans never get to see me play like this. So that’s really the idea behind this whole tour. – Mike Posner

Opening with one of my personal favorites, “My Light”, Pose (as he put it) sped things up before he slowed them down. Right out of the gate it was a very nostalgic feeling taking me back to the college days where he’d rock a small venue, remixing the beats to his own songs right there on the fly — just him and his keyboard(s).

After the first song, Mike instructed the audience to take out their phones. He then gave us 45 seconds to take pictures, and that they were to go unused for the rest of the show. Obviously, there were some badasses who did otherwise, but I thought that was cool because it was an attempt to have the audience actually connect with the show. Often times when hanging out with friends we spend so much time documenting it that we don’t actually hang out. And that’s what this was — an hour and a half of hanging out with The Pose. So next time you’re at a show, take pics/videos — sure. But I encourage you to ENJOY the show and spend time posting and coming up with perfect captions later! When you’re in the moment BE IN THE MOMENT.

Anyway, as the night carried on Mike played some familiar songs, but mostly a majority of which I hadn’t heard yet. Many of his songs focused on family or his current perspective on life and the kind of music he desires to create. If there’s one word I could use to describe his show, it would probably be “honest”. Mike bleeds a level of honestly into his songs that you seldom find in other mainstream artists today. In the college come-up, Mike’s songs focused on smoking and his various experiences with girls. However, as his life continues to change, it was evident that his music is now inspired by different things. He still sang about girls and relationships, but he also reflected on his family and lessons learned.

He did a surprising array of new material, but there were three new songs in particular that stood out to me. I think it was a combination of well-written lyrics, being so close that I could see the expression in his delivery, the acoustic/piano accompaniment, and of course the reliability — whatever it was, these songs really resonated with me:

Haha, no one knows my name overseas but the idea of leaving and having experiences outside your backyard — all the while fully intending to return is something I can relate to. I’m not sure where life will take me, but I’ll never forget the city that raised me, and when my time comes there’s no place I’d rather be buried than “next to my father”.

P.S. – My eyes were closed half the time I was listening to this.

I walked around downtown
And met some fans on Lafayette
They said “tell us how to make it, ’cause we’re getting real impatient”
So I looked them in the eyes and said…
You don’t wanna be high like me
Never really knowin’ why like me
You don’t ever wanna step off that roller coaster and be all alone

I think this directly relates to the price of fame. The value of something sometimes lies not in what one attains with it, but in what one pays for it — what it costs us… They say the road to success is lonely — you lose a lot of friends, can lose your girl, and sacrifice time with your loved ones. The line that really stuck out to me was “you don’t ever wanna step off that roller coaster and be all alone” — the roller coaster being a metaphor for this up and down ride we call life. Because when it’s all said and done, what’s having it all if you haven’t anyone to share it with…?

I didn’t know you were gon’ break my heart then
I didn’t know the pain I’d feel right now
And I smile, yes I smile
But underneath are memories
That I’m trying, yeah I’m trying, to let go
But it’s not that simple
Type of misery
All these mixed up signals
In my head
I still hear these echoes
Of when you loved me
But now you’re just a girl in my mind
That used to be mine

I feel like we all can relate to this one — it’s a pretty straightforward case of dealing with a heartbreak. And as much as everyone wants to tell you to move on, and that there’s plenty of fish in the sea, we know that it’s just not that simple. There’s only one person I think of when I hear this song …and I’m sure you won’t read this but it’s no secret who you are. And in the event you do read this, just so we’re clear: Still Not Over You (Part 2) is your song too.

TO MAKE A LONG STORY, SHORT

Overall I was thoroughly impressed with this show. Mike joked with the crowd (Mike Posner comedy tour coming to a city near you) and surprisingly cursed a lot more than usual — which I think may have been a calculated move to show the world he hasn’t gone soft haha. He really showed off his dedication to his craft by showcasing his ability to learn and play both the guitar and piano very well, in addition to the strength in his singing voice and his enhanced falsetto. Posner is perhaps one of the most misunderstood and underappreciated artists today, and it’s true, his music isn’t for everyone. Some of the fellas may be mad he doesn’t smoke anymore, or some chicks may feel some type of way that he no longer lives in the gym, but if you really listen to his music and internalize his way of looking at the world, I promise you’ll be better for it. So to Pose, Clinesauce, Jake, and Matt: well-done fellas.

Relate. Love. Inspire. What that basically means is if I, a normal kid from Michigan, can be up here living out my dreams, then maybe yours aren’t as far as they seem. – Mike Posner 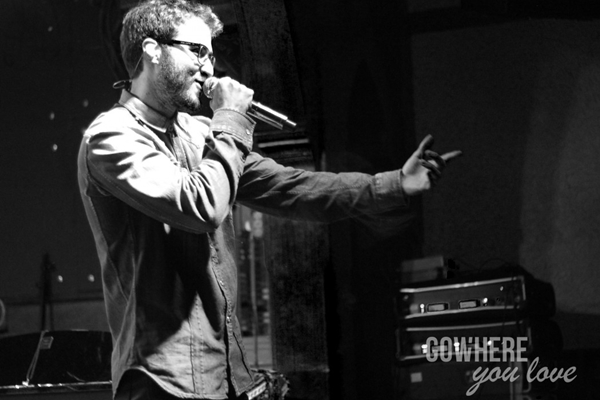